The Historical Society’s collections include:

Archives: The Middlesex County Historical Society archives feature a broad spectrum of  18th- to 20th-century public records from the City of Middletown and Middlesex County, Connecticut. Among the holdings are selectmen’s letters, court records, tax lists, town accounts, naturalization records, indentures, and census records. Our collection of private and business papers from the 1700s to the 1900s is equally wide-ranging. Highlights include diaries, journals, account books and correspondence from a diverse selection of local individuals and families; early shipping and maritime records, including custom house records; records of local clubs, organizations and schools; and military records from the Revolutionary War, Civil War, and militia. We also maintain extensive research files on many historical buildings, cemeteries, churches, businesses and local institutions.

Decorative arts: Antique furniture from a 17th-century joined chest to an elaborate gilded Victorian mirror; ceramics, from 18th-century porcelain tea sets to hand-painted Victorian punchbowls; metalware, including pewter made by the Danforths of Middletown, one of the 18th century’s most prominent pewtermakers.

Textiles: 18th- through 20th-century clothing and accessories; approximately 20 quilts and coverlets; and a collection of needlework made by local girls and women in the 18th and 19th centuries.

Photographs and Images: The photographic collection of the Middlesex County Historical Society contains samples from the earliest days of photography to present day images of life in Middletown.  Main Street, as it appeared through the years, is well-documented as are the various natural disasters that occurred, from the Blizzard of 1888 to the Hurricane of 1938. Local people are well-represented in the collection, from the faces of young men going off to fight in the Civil War, to their gathering on Little Round Top at Gettysburg on the 50th anniversary of that battle.  Everyday life is depicted in many photographs, as well as people working in the quarries, factories, and stores.  Researchers can see pictures of many celebrations, including the 250th anniversary of Middletown parade, in 1900, and the Taft Day parade, in 1909.

Miscellaneous: A burglar alarm that shot actual bullets, a Victorian-era oak recliner, cigar molds, and apothecary bottles are a smattering of the items that were once made or used by residents during Greater Middletown’s history. 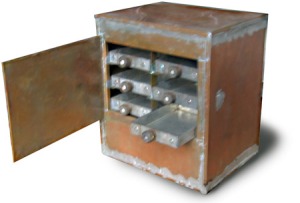