Less than a hundred years after the formation of the United States of America, the nation found itself embroiled in another conflict that threatened its very existence. Known by many names, the War of Secession, the Rebellion, the War Between the States, the Civil War lasted for four long years and resulted in the deaths of over 620,000 people, or 2% of the population. In terms of today’s population, this would mean over six million dead.

Men marched off together to war with their fathers, brothers, uncles, cousins, and neighbors while the women and children were left behind to continue the duties of daily life without their menfolk. Explore how this moment in American history affected the men, women, and children of the City of Middletown and continues to impact our lives to this day. 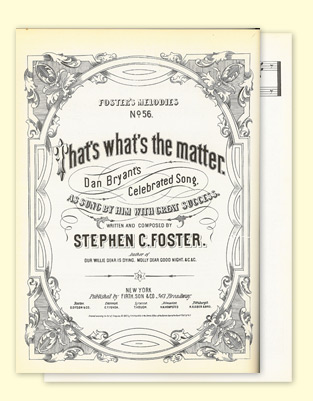 Music has always played an important part in the human experience. From the origin of music and language to the development of instruments and written music, tunes have reflected their time and place. Stephen Foster (1826-1864) is commonly considered a pioneer in American professional songwriting. The author of the well known “Camptown Races” (1850), “Swanee River” (1851), and “Jeannie With the Light Brown Hair” (1854), Foster wrote works that are still very well remembered.

“That’s What’s the Matter” was written in 1862 as a Northern rival to the popular Southern anthem, “Dixie.”

The Civil War was a turning point in American music. By bringing together soldiers from across the country, each with their own musical tradition, the war led to the development of what is known today as American folk music.